Well, where can I start?

We are in the year 2016. Us as human beings and as an entire human race, have come so incredibly far and everyday, are continuously striving to go even further, beyond our expected limits. We have clobbered through an extremely difficult, tedious, tiresome, eventful, yet I guess, rewarding journey of life and have found ourselves in a position in which we can look at our world around us and smile, smile a large and fulfilling smile of sheer integrity and be proud. Proud of how far we have come as human beings. We no longer take the mere title as 'homo sapiens' and have managed to live through the stone ages, overcome the ice ages, battle through the middle ages, and make it through all the other ages - I don't exactly know all the others, what do I look like a fucking historian to you? Do I seem as if I even care or give a fucking damn about fucking dinosaurs and fucking cave men and fucking Adam and fucking Eve (from a Christian perspective anyway). I'm simply using the overused and cliche tactic of  deliberately prolonging an introduction to make myself sound like an optimistic and acceptable representation of a human being and establish myself as the kind of blogger I am (as this is my first post after all) only to then shock you with something I consider radical and outrageous with the hope that you agree with my extremely opinionated as well as subjective point-of-view.  I mean were human beings even around during the ice age? No one bloody knows and no body fucking cares, I mean they teach us this shit in primary school but who even actually fucking-

Off topic. Did you laugh? Because that was supposed to be funny and make you laugh. It's something called humour. One thing that our society and our world today knows absolutely fuck all about.

If you have the ability to - and quote year 7 English - 'read between the lines', then you'd probably have guessed that at some point, I was going to make reference to the fact that our society (well, Western society, I don't really know too much in regards to the Muhammad way of life) should in no way at all be 'proud of how far we've come as human beings'. This man comes across as the ideal representation in support of this statement... 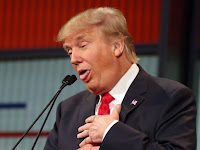 But lets leave poor Trumpy alone, I think we're a bit too hard on this poor man, give him a chance for Christs sake. I mean sure you know, he has his views, but isn't everyone entitled to their own opinions? So if that means building a wall to prevent all the Muslims or Mexicans from coming in to his beloved nation or whatever the fuck the old fart yabbers on about then sure, be my guest, no ones judging you. As they always embed into our brains from a young age; you must follow your dreams and follow what your heart tells you to do and anyone who vows to argue or disagree with that statement is simply, well, just as bad as the Devil himself.

But enough of Trump and lets gets back to the original point. Lets talk about how our society is in turmoil and the way in which it finds entertainment through the most ridiculous and frankly, unfunniest of things. Lets talk about trends.

Since the day social media became a thing and young people began to give their lives up in hopes of tracing that video they found on 'My Russian Sluts.net' last Friday night whilst Mum went for a girls night out with her single, miserable and middle-aged acquaintances, internet trends and just general trends have always played a massive role in the ways in which we communicate with each other and entertain one an other. In a way, they are what make our society, our society. They're a way in which we feel as if we have some kind of purpose to live. For example, you could be getting ready to go out with your four-man 'squad' on a Saturday night. Three of you have arrived at the point in which you are supposed to have met and you're all stood there waiting for the fourth member of the squad in your 'fresh crep' - or for those who speak English, Nike Air Force Ones. Then suddenly, the fourth member of your squad finally appears, however, you all notice an anomaly in the way he is dressed. Black Nike hoodie? Check. Black Nike Trousers? Check. A snapback pointing in a backward direction? - NOT forward. Check. Seems alright. All is good...but wait. There is just one thing wrong with the way in which he is dressed. As he is stood there glaring into the menacing eyes of you and your two companions, most likely unaware of the fact that he is wearing Ugg Boots, not Air Forces, you all look at each other and suddenly, a moment of tension and realization is felt. There is a silence. Who's going to be the one to say it? And suddenly, it happens. Raheem squats down glaring at Abdi-Salaams shoes and yells the inevitable line, 'WHAT ARE THOSE!?' Chuckles ensue then the four members return back to life, reminiscing on the reference to the internet trend which has suddenly came forth for use in a real life situation.

If you know me, and know me well, minus my incredibly short temper, you'd know that I take years and years to get the point. Which I am still doing now. I haven't got to the point. The main point. I'm wasting your time. Stop reading.

Well, congrats because you've continued to read on and you've now reached 'The Angry Bloggers point'. That was also an attempt to be funny. You're meant to laugh. Laugh then.

You enjoyed that right? Fucking hilarious weren't it? I mean what on this earth could possibly be funnier than a handsome teenage boy called Daniel, who's continuously showing how he is most definitely 'back at it again with the white vans' - see what I did there - and a spine tinglingly amusing cameraman repeatedly yelling...this is the grand moment you've all been waiting for, I'm finally going to say it, the line, I'm gonna say it, here it goes....

Well fuck you all I'm not going to say it. I mean you just heard it in the video 10 times so why would it make any kind of difference whatsoever if you read it? You're reading this in your head are you not? Won't feel as if you've achieved anything by reading the dreaded words rather than hearing them.

Lets face it. This video is not funny. This trend is not funny. The majority of trends are not funny. It pisses me the fuck off. I can't lie, some throughout the 17 years of my life, I actually have found rather humorous, but generally, they're ridiculous and the fact that they are so ridiculous, is what makes them funny (most of the time). How anyone even aloud this to be a thing goes beyond me. And if that's what is considered as 'funny', then it just goes to show that anything can be funny. Anything. I could put up a picture of a lemon and expect you to laugh at it because I mean, that shits fucking hilarious. Its yellow for crying out loud. Doesn't that just make you want to shit yourself with laughter, literally? In fact, the first time I watched this video, I saw it from someone who shared it on social media and thought I might take a look at it but instead found myself increasingly unsatisfied and am glad to say that I watched it with the most straightest possible face ever. I think there must have been a point in the video where I tried to force myself to laugh at it because I mean, I just felt sorry for the poor lads. Well it came out as a cough and I choked a bit. Not relevant...The dudes voice is quite funny I have to say but only worthy of a couple of claps, not really a chuckle. When you actually look at it from a bigger perspective, you begin to understand that it's quite sad actually. Seriously.

So society, people, human beings, you can all take a fucking bow for ever allowing this shit, and many other shits, for ever becoming a thing. And it makes me seethe with rage when I notice the types of things that become famous, well-known and trendy in this world because the majority of them are just ridiculous, no, ridonkulous. You can call me 'jealous' but tell me what the fuck there is to be jealous about. Personally, I know I'm not that funny and have been continuously told that I am only funny when I put no effort into making the other person laugh. But the world is becoming stupider by the day.  I mean the other day, someone labelled me as a 'fuckboy' simply due to me being lightskinned and because of my haircut. Well, it was actually a while ago, but it still makes me pissed off...but lets leave lightskinned stereotypes for another article. That's called giving a 'sneak peak' for those of you who don't know.

You know what. I'm done. Fucking done. Nuff writing for me. I'm gonna end with the textbook, 'please leave a comment and tell me what you think' and feel free to call me a hypocrite and leave me with a whole bunch of sad attempts to contradict the points I made in my blog but remember, don't judge me and only God can judge me. Here's a picture of a lemon:

Posted by Anonymous smartass at 09:35